You are here: Home / Where Art Works: Artist Communities and Creative Placemaking / Walking through Covid #18 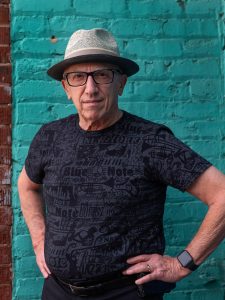 The Covid19 pandemic has had a profound worldwide impact with over 273 million cases and over 5.4 million deaths. As of December 17, 2021, here at home we have had close to 51.5 million cases and 825,785 deaths. The U.S. is perhaps the richest country in the world, has experienced over 15% of all deaths in the world.

When the pandemic struck and required self-isolation in March 2020, my daily routine was altered like everyone. I began early morning walks. The streets were deserted with only an eerie silence. Always masked, I explored adjacent neighborhoods and began to notice new things. The absence of people was jarring. I found blocks of nothingness, as if the homes and apartment buildings were abandoned. Was I in one of those sci-fi movies where people abandoned their homes and fled or disappeared?

Armour’s interest in photography began using a Kodak Brownie and a Kodak Viewfinder. While pursuing a doctorate in educational psychology and a career as an educational administrator, photography was ever present. In retirement Armour pursued his craft with courses at Chicago Photography Classes and joined Jane Fulton Alt’s critique group. His photography includes landscapes, environmental portraits, social documentary and constructed works. He has shown work in locally, nationally and internationally, and has appeared in numerous publications. LENSCRATCH featured Surface Tension: Beauty and Fragility in Lake Michigan, a collaboration with Ted Glasoe exhibited at the Peggy Notebaert Nature Museum, the Evanston Art Center, artNXTlevel, and the Saugatuck Center for the Arts.

Recently, he had four solo shows in Chicago and an artist’s residency at the Brush Creek Foundation for the Arts, Wyoming. Armour helped form Artists for Action Chicago, a group of area artists that stand for progressive values. He is a member of Perspective Group and Gallery, which “is a not-for-profit, community-oriented cooperative whose purpose is to promote fine art photography.” Perspective Group and Gallery is based in Evanston, IL.

Be the first to review “Walking through Covid #18” Cancel reply