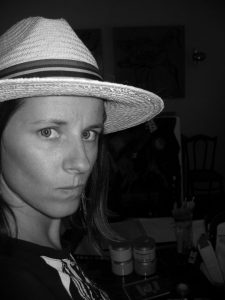 Tiphanie Spencer is a French-American painter whose artwork is distinguished by a vivid interaction of shapes, colors and lines. Although her images appear chaotic, Spencer follows a precise internal logic and her juxtaposed forms and objects create visual representations of a subconscious process.

Spencer’s paintings reveal a strong desire to find her identity as a woman and as an artist. Her interest lies in giving a pictorial voice to characters and allowing them to exorcize their emotions through a process which is inherently complex. Her art conjures up her own conflicted sense of identity, as well as women’s history and their role in society.

Tiphanie Spencer displayed an aptitude for art at an early age, and was encouraged by her mother to draw, paint and photograph. She grew up surrounded by paintings of her maternal grandparents, Maxine and Edward Runci, who were active figures of the American contemporary art and advertising scenes in the 50s.

Spencer began her career as a photographer. After completing her schooling, she moved to New York City in 1996 and spent the following three years photographing her life amidst the late night music scene. She worked at the International Center of Photography, then at David Sirieix, Inc., a small fashion advertising agency. In 1998, she began to gain recognition as an artist when she organized her first solo show in an underground New York club. She then continued exhibiting her work around the city through private viewings, which encountered vivid success.

When she returned to Paris in 2000, Spencer spent 4 years working with photographer Yann Arthus-Bertrand organizing the exhibit “Earth from Above” around the world. During this period, she began a series of drawings purely evoking her feelings by superimposing cartoon-based forms and non-figurative shapes. The year 2003 marked a turning point in Spencer’s career, as she gave birth to the first of her three children. With this came a physical need to express her internal universe and liberate her emotions on paper. It was at this moment that she decided to devote herself entirely to her art.

Spencer moved to Los Angeles in 2007. In an attempt to develop and perfect her technique, she began a series of larger artworks using different media and a wider range of colors. Some of these paintings achieved a great profoundness, and her influence in surrealism, cubism and abstract expressionism became apparent.

She returned to Paris in 2008 and began using symbols and content from new sources. By then, her work began reflecting more socio-political themes such as healthcare and different facets of the economic crisis. Her canvases became very large allowing her to loosen up her brushstroke and become more explosive in her choice of color and content. Often satirical, her paintings also explored topics such as relationships and culture with the same deconstructed and offbeat approach.

Spencer now lives and works in Chicago. Particularly interested in how the subconscious takes over a direction or a controlled movement, she continues to explore what makes and defines us as human. Her artworks are in many private collections in Europe, the United States and Asia.

In 2012, Spencer founded TAP (The Arts Palette), a member-based arts production company working with artists in the visual, literary and performing arts. TAP produces exhibitions and happenings throughout Chicago that set an intimate stage for artists and patrons to come together.

Be the first to review “Melodramatically Speaking” Cancel reply