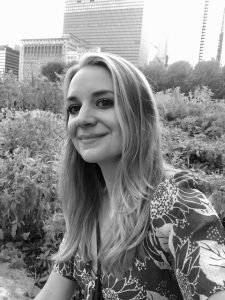 In August of 2020, I was in Rocky Mountain National Park during the Cameron Peak Fire. The air, sky, and sun grimly showed signs of the wildfire without seeing its presence. Though it was beautiful and otherworldly, it transformed a landscape with which I was extremely familiar into something eerie, ominous and reflective of the time. Driving up 12,000 feet along Trail Ridge Road, my mind began to slip in and out of seeing reality into a world of feeling and symbol. Going back to the studio, my references never seemed quite right, especially when describing the red hot sun and remembering how it moved above the tree line and hovered over crowds of people like an entity swathed in veils of tangerine smoke.

I’m drawn to landscape and place because of the transformative way it can reveal inner life. Translating the experience and memory of a place through paint allows for pleasant divergent ways of describing the essence of a thing versus depicting its formal qualities. I have spent October of last year until now in the studio with this place, getting further and further from my photo references and focusing more on the elements of the mountain landscape that hypnotized me, forced me inward, and have continued to change slightly with each recall.

Sarah Boyle is a Chicago based painter who explores themes of place as a means of untangling the randomness of memory.  She enjoys finding a balance between a pragmatic ways of seeing and the influence of narrative, symbolism, and the material nature of oil paint that leads to breaking apart the construction of an image. She starts with a collection of her own photo-reference, sketches, and journal notes, repeatedly flipping through an archive of inconsequential moments. Place transforms from tangible subject into wordless thought. This drifting to and from the subject is the respite within the confusion and desire to recreate memory. Sarah received her BFA in painting and drawing from the School of the Art Institute of Chicago in 2007, and studied illustration at Ringling College of Art and Design in Sarasota, FL and theatrical design at Syracuse University. She has been a resident artist of the Cornelia Arts Building in Chicago, IL since 2015.

Be the first to review “Falling Slope” Cancel reply