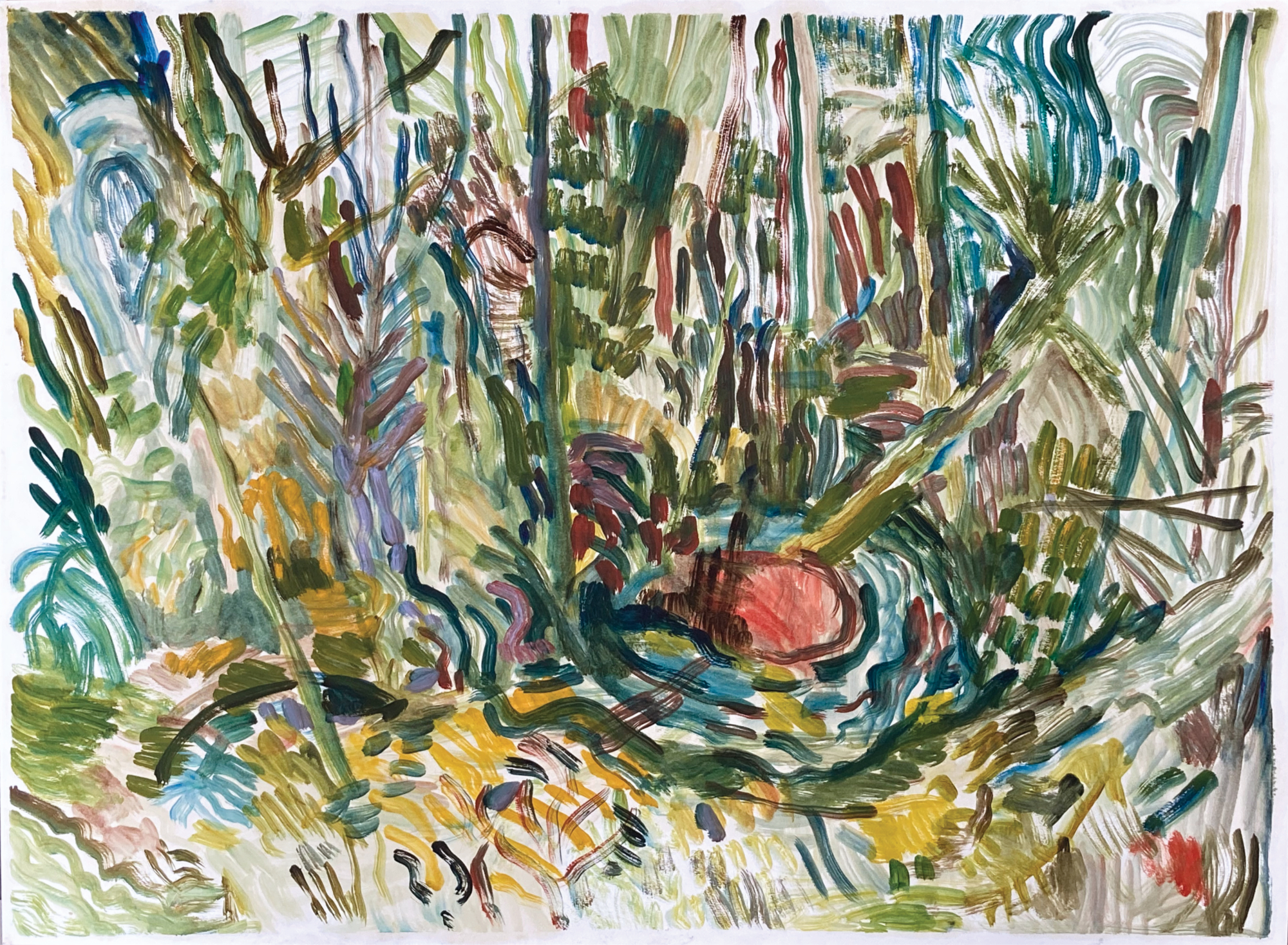 [CHICAGO, ILLINOIS, February 2022] A landscape painter, artist Francis Zaander finds intrinsic connections between the natural and the man-made in paintings that combine a specificity of place with larger themes of belonging, spirituality, and reflection on where home is. His recent work follows a personal exploration of the American landscape, from the Midwest to the West Coast and back. His first solo-exhibition in Chicago, “Field Guide to North American Happiness” includes a selection of 23 paintings on paper and panel, many created on site in the Olympic Peninsula between 2018 and 2021. An opening reception will take place on Friday, February 18, from 6-9 P.M. The exhibition will be on view through April 9, 2022.

In the large-scale watercolor on paper, “Strait of Juan de Fuca, WA”, the working over of waves and rocky cliffs give the feeling of a landscape viewed over time and in changing weather conditions. The painting becomes a map weaving together observation and imagination. Painting on site, the artist is both a recorder of nature and engaged in an arduous struggle to encapsulate it on his own terms. The artist describes a typical day of painting on location:

“One sunny morning, after a second cup of coffee, I began the ascent of the rocky bluff above my camp. I took a plastic tarp and two pieces of birch plywood with me. The panels were rectangles about my height and when placed side by side, they formed a square. They were thin, not at all heavy on their own, but once the trail ended and I began balancing them while scrambling up the loose boulders, they quickly became tiresome. Gusts of wind blew down the gorge, threatening to pick me up and carry me to the top of one of the Douglas firs that reached my own height at this point in my climb.”

His smaller pieces (22 x 30”) seem to reach into a microcosmic perception of water, stone, and earth. In his “Forest” and “Pond” pieces, Zaander’s spontaneous brushstrokes evoke the movement of trees, leaves, wind, rain, and all that animated activity of life unseen by human eyes. His few wholly abstract pieces, such as “Water #1,” focus in on a detail and explode it into repeating organic shapes; the micro made macro.

About his own work Zaander says, “Sometimes it’s hard for me to talk about painting, because I try to keep verbal thoughts as far away from my practice as possible. I want to be working more within the realm of intuition and reactions: to get as close to the thing as possible without looking directly at it. I would like my paintings to be spontaneous stories.”

Zaander approaches observational painting as an act of self-reflection. His painting is loose and responsive; more akin to the manifestation of an individual spiritual connection, as in Charles Burchfield’s later work, than the romanticized, classical beauty of American landscapes depicted by the Hudson River School painters of the 1800s. Zaander’s exploration of landscape and his obvious awe of the surroundings he represents, result in work that engage the artist and viewer in active contemplation of the world around us.

Francis Zaander was born in St. Charles, Illinois, in 1984. He received his BFA from the University of Iowa in 2003. In addition to his visual art, he also creates video and performance works which can be viewed on his website at https://zaander.org. Francis Zaander currently resides in Chicago, Illinois.