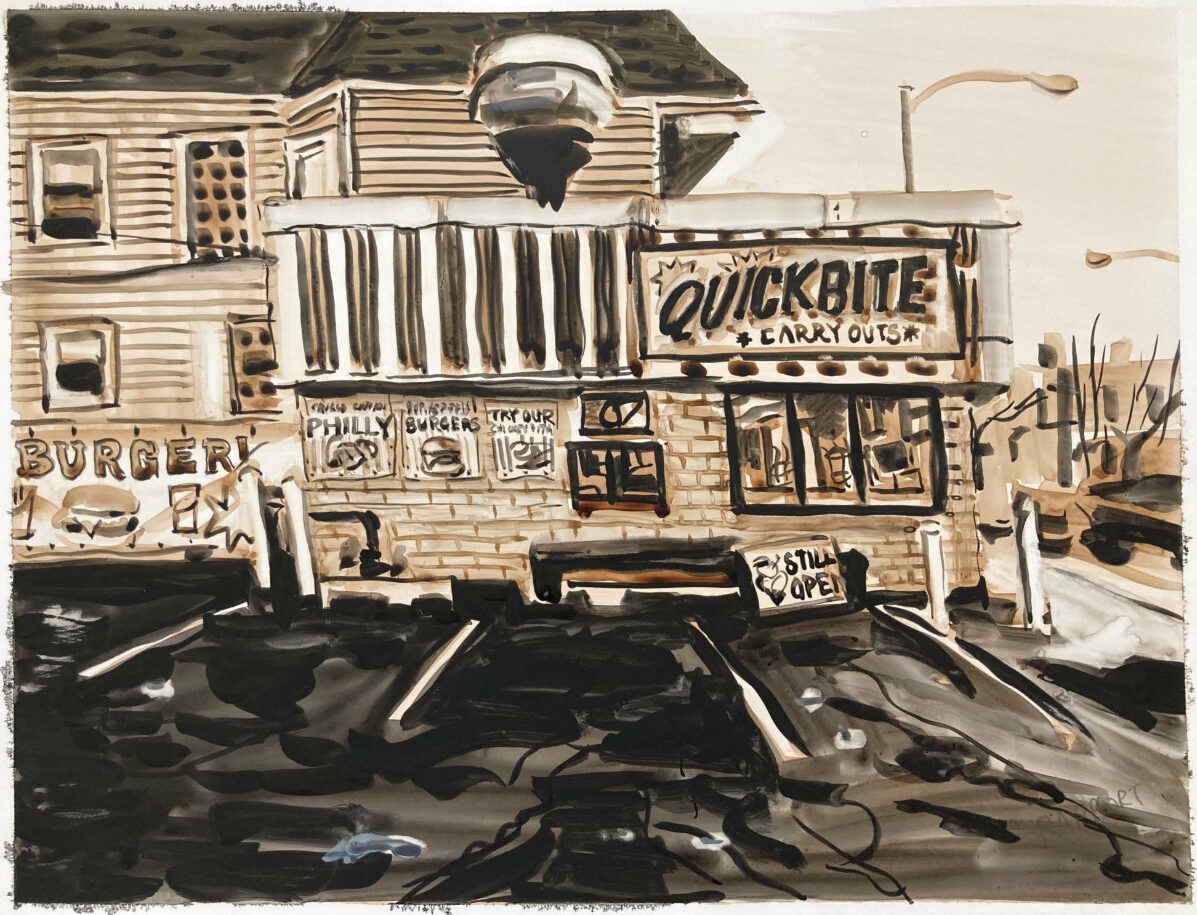 “I had this sudden awareness, she continues, of how the moments of our lives go out of existence before we’re conscious of having lived them. It’s only a relatively few moments that we get to keep and carry with us for the rest of our lives. Those moments are our lives. Or maybe it’s more like those moments are the dots in what we call our lives, or the lines we draw between them, connecting them into imaginary pictures of ourselves.”

Eat Paint Studio is pleased to announce two extended evenings with to see the exhibit and listen to local musicians who have been invited to perform this August. I hope you will join us!

Still Open, an exhibition of works on paper by Emily Rapport, continues a theme of interest for the artist; neighborhood scenes and portraits of Chicago’s changing urban landscape. Her typically vibrant oil painting palette is restricted to moody earth tones of black, grey, brown and sepia inks. These small scale works on paper have a documentarians eye for detail but seem to find elasticity in the moment rather than rigid perfection.

Rapport takes note of down-at-the-heel homes, corner stores, vacant lots, and construction sites from the near North side neighborhoods of Lincoln Square, Ravenswood and Bowmanville in Chicago. Like short stories, each of these paintings presents its own narrative journey that contributes to a larger sense of the current American landscape.

As the self proclaimed Poet Laureate of Ashland Avenue, Gary Camaro has been kicking around on the local Chicago music scene since the mid-90’s in various rock, blues & country bands. Since breaking away from his last outfit, The Wabash Cannonballs in 2019, he has released his debut solo effort Wolf Ryot Star & has emerged from the pandemic with his sophomore solo release, In The Direction Of Travel. This new effort encapsulates what he defines as “Heavy Americana”. Blazing rock & roll music saturated with roots of country & blues while wearing the main influences of Izzy Stradlin, Son Volt, Keith Richards & Jack Kerouac loudly upon his sleeve for all to see & hear. Like his solo debut, he has once again stepped into the Producer shoes & recorded this album entirely on his own, including art direction from his atelier, Black Jackal Studio in the Malt Row section of Chicago.