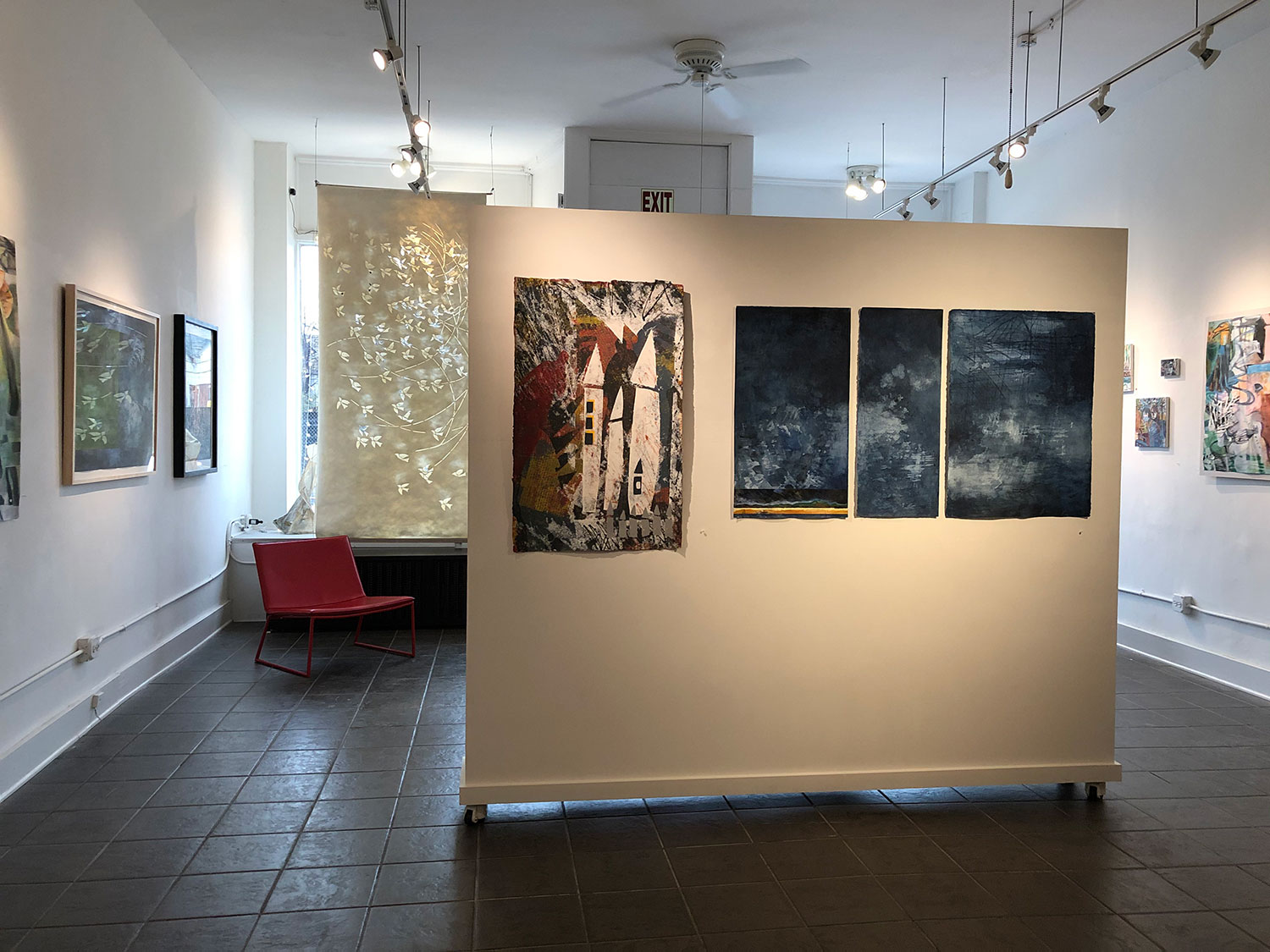 Poem by Susan Gundlach, “Journey through an Exhibit: 3 Moments,” for the exhibition THIRST

. . .when looking at a thing we often drift into a memory of something else,
However tenuous the link. – Ciaran Carson

The journey begins
with the visuals bringing ideas, colors, and images to light.
As viewers, we respond with questions and memories
from our own lives and imaginations.
We humans, the storytelling animals,
take in the stop-motion millisecond portrayed in a painting,
often wondering what might have happened on
either side of that moment.
We may look for a narrative arc in that fixed freeze-frame
or create a story with our own experience.

1.
A mixed-media image of a bird on a beach,
alert, looking back over its shoulder,
ignoring the mysterious figures in front of it.

A story-seeker might ask,
where had that blue and yellow bird been
before landing in its spot on an empty beach
that isn’t quite empty— looking for food, fleeing a predator?
Is it aware of another bird, a fearsome creature overhead
swooping downward out of a dark sky?
For some reason that ominous tinge has me thinking
about past seasons of dive-bombing crows wreaking havoc on city sidewalks.
But I also recall the V’s of Canada geese honking overhead,
the faintest hint of pink on their breasts, as they pass by on their fall journey.
I recall, also, the first time I saw an indigo bunting,
that shock of iridescent blue, bursting from the woods
and disappearing in an instant,
leaving me wondering if I really saw what I saw.

2.
A monotype of crowded houses,
some transparent forms,
many gesturing with their pointed roofs.

Much is happening in this neighborhood
of shining and subdued colors,
a place of stability, action, and maybe spots of unrest,
a place where children ride around and around the block on their bicycles,
where grown-ups help each other carry heavy furniture out to a U-Haul,
where neighbors bring meals to a family shaken by cancer.
Yet, this busy scene also includes empty houses
that suggest another kind of existence: one of isolated lives,
people who may have no homes at all.

3.
A two-part paint and cut-paper work in blues, grays, and black,
a dominant flower, shadows of many small globes,
and one large shady orb, half-hidden—
shapes and hues that seem to speak of time.

Why is the white flower with its shadowy spheres
pointing toward the darker part of this piece?
Is it attempting to cross the boundary between day and night,
offering pieces of a universe only visible in daylight?
I’m reminded of the time some bats flew into our Wisconsin
living room, flitting and squeaking, crashing into walls,
frantic in the disruption of their own circadian patterns and needs;
and I also remember learning the word “crepuscular,”
the word that describes animals most active in the margins,
in the day’s early dawn and in the dusky light before nightfall,
creatures like mosquitoes and wolves,
blurring those dividing lines between daytime and nighttime.

And so, step by step, question by question, detail by detail,
the artist and the viewer together create part of a world
made of new stories and old memories,
beyond the facts of the artwork, beyond the borders of the picture,
beyond that frozen moment portrayed in the art:

Learn more about the exhibition here.

Susan Gundlach’s poems have appeared in such publications as After Hours and *82 Review, The Crafty Poet II, The Practicing Poet, as well as in the walkway of the Evanston Public Library. She co-edited the poetry anthology, In Plein Air. Sue has served as visiting artist at local grade schools and as judge for state poetry contests. Her poems for children can be seen in Cricket magazine and BALLOONS Lit. Journal. Her poetry for “grown-ups,” paired with artwork by Lea Basile-Lazarus, has been featured in exhibits at the Noyes Cultural Arts Center and at the Evanston Library. Sue lives in Evanston, Illinois, with her family, human and canine.

Support the artist! Check out Stories in Images and Words: An Exhibition of Art and Poetry, Susan Gundlach and Lea Basil-Lazarus, 2Arts Press, 2017, on Amazon.com.