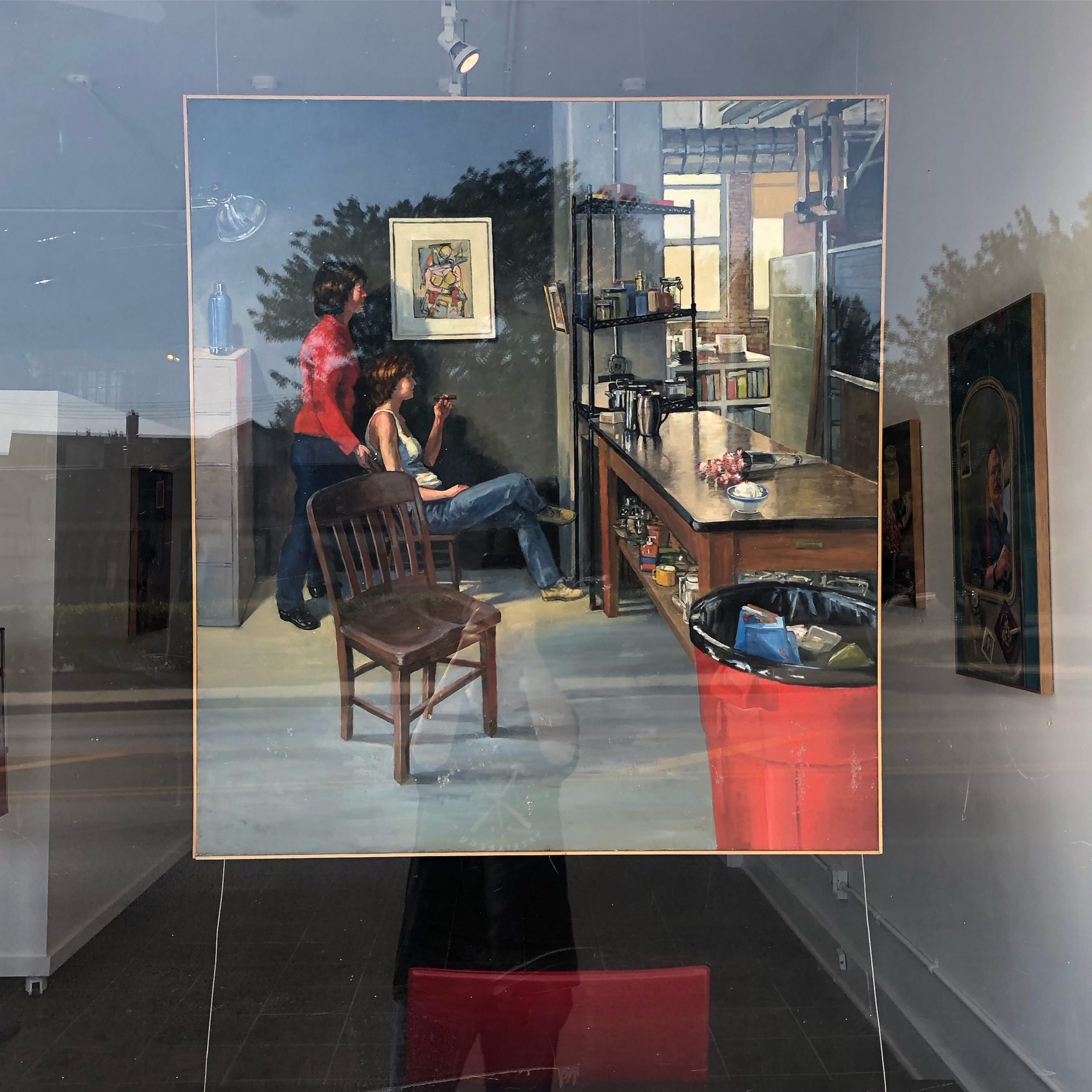 Eat Paint Studio is pleased to announce a retrospective exhibition featuring the work of Chicago artist Marion Kryczka this June. Spanning his 40+ year career the exhibit will include selected recent paintings and works on paper. A closing reception will be held for Marion Kryczka at Eat Paint Studio, 5036 N. Lincoln Ave, on Saturday, July 13, from 3-6PM. The exhibit will be on view through July 20, 2019. This event is free and open to the public.

For many years, Marion’s studio was directly opposite the Aragon Ballroom, in Uptown. An ethnically diverse neighborhood rife with gang violence and peppered with tiny bars and liquor stores, Uptown was (and arguably still is) a living petri dish of humanity. A figurative painter for the duration of its not being cool, Marion painted lush and provocative nudes against the green linoleum backdrop of his small studio. The Cleaning Woman at Rest #2, shows an ample bosomed young woman grinning to herself, framed by a half empty/full bottle of vodka and a particularly insistent red mop handle. A red rose sits in a box behind her, petals just shy of falling to the ground in shame or resignation. Some of Marion’s nudes are based on pornographic images (ancient and modern). Transcribed in paint they retain their essential vulgarity but become beautiful in the sense that they become more true. These paintings are fueled by male desire and an appreciation for the female form, however, the humanity of the subject allows her autonomy. Her gaze and thoughts are not with her gentleman viewer.

In the early 2000’s, Marion’s work became more focused on studio based still life compositions. In these momento mori (meaning, “remember you will die”) paintings, Marion groups objects such as knives, jars of peppers and ginger, artist tools, and skulls in arrangements that suggest Renaissance “vanitas” paintings, using allegory to point to the futility of earthly ambitions and accomplishments. He observes that, “Objects, once arranged, are no longer the same. They take on a new significance.”

The artist consciously manipulates a seeming realism in the service of transcendent perception. – Perhaps one of the reasons that these techniques contribute so much to the quiet power of expression in the works is that they arise so naturally and unobtrusively. The artist throughout his life experience has assimilated the past of art and human histories and, with an impressive talent and lively technique, allows instinct to mould his expression. Kryczka, at the opening of the exhibition, preferred to pass over a point by point explanation of specific paintings, and, when questioned by one of the gallery-goers, gave one of the most intelligent responses any creative artist can give: “I see a painting — who cares what it means — I like it.”

The language of paint connects us to the history of art, politics, and movements that came before us. Marion’s disdain for “art speak”, his work ethic, and lack of illusions about his own abilities make him a painter’s painter. The subject is the puzzle, the narrative, around which the painting unfolds.

Marion’s later still lifes gravitate to more domestic scenes. These paintings are quiet, self reflective, internal. A kitchen counter displays the familiar sprawl of dinner preparations; raw meat or fish, a transistor radio, half a stick of butter. The majestic trout is esteemed equally for his beauty and strength when alive as he is for his contribution to the dinner table. These paintings depict simple pleasures, simply painted.

Several interior scenes pay homage to Johannes Vermeer’s cool, meditative light and relatively minimal palette. In Light Sconce, a darkened hallway points the viewer toward a second floor, stairs we can’t ascend but strain to see above. Our sightline is kept low by a peaked ceiling gilded with reflected light, a church in praise of the domestic.

“You could say I have an obsession with the temporal nature of life and the inevitability of mortality,” Kryczka said in a 1999 interview with arts writer G. Jurek Polanski. The passage of time, and the inevitable presence of death in life, are a major theme throughout Marion’s work as a painter. But, this interest is rarely morbid. Marion’s personal vitality and exuberant embrace of color and light, glory in the sensory experience of life.

After graduating from the School of the Art Institute, Kryczka earned a master’s degree from the University of Illinois at Champaign-Urbana. He returned to SAIC as an associate professor of painting and drawing in 1981 where he taught until his early retirement due to Parkinson’s disease. He continues to create work, primarily large scale drawings, in his home studio. Marion’s work has been exhibited in solo and group exhibitions throughout Chicago, New York and in Poland. His latest retrospective exhibit will be on display at Eat Paint Studio through July 20, 2019.